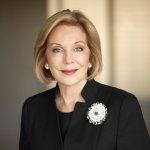 The Australia–United Kingdom Chamber of Commerce is delighted to launch its Leaders in Conversation series with our first event to feature the iconic Ita Buttrose AC OBE. Ita is a truly exceptional Australian: a legendary media trailblazer, businesswoman, best-selling author, committed community and welfare contributor and 2013 Australian of the Year.

Currently Chair of the ABC and the Australian Mental Health Prize Advisory Group, Ita will share reflections on her career to date with key lessons she has learned along the way including leading courageously, navigating uncertainty and driving positive cultural change. This session will also include an opportunity for Q&A from the audience.

We look forward to welcoming you to this fascinating discussion that is not to be missed.

Please note this is a live event only – no recording will be available.

In 2019 Ita became a Companion of the Order of Australia for her service to the community through leadership in the media, the arts, the health sector and as a role model.

An accomplished communicator with a wealth of experience across a broad range of industry sectors, Ita works behind-the-scenes and in the public eye for major corporates, small business, governments and charities.

In 2019 Ita was chosen as a Shero Barbie, one of a collection of 20 Barbie Dolls that globally recognise female role models and achievers.

Media: Ita was the founding editor of Cleo, the youngest ever editor of The Australian Women’s Weekly, the first woman to ever edit a major metropolitan newspaper in Australia as Editor-in-Chief of the Daily and Sunday Telegraphs, and the first female director of News Ltd Australia. She has hosted prime time shows on radio and television.

She later started her own company, Capricorn Publishing, and created ITA Magazine, a magazine for the woman who wasn’t born yesterday.

In 2011, her earlier career was immortalised in the acclaimed ABC mini-series ‘Paper Giants: The Birth of Cleo’.

Ita was inducted into the Australian Media Hall of Fame in 2017.

Author: Ita has written 11 successful books, including her best-selling autobiography ‘A Passionate Life’.

Awards: In 2018, Ita was conferred with the University of New South Wales’ highest honour – an honorary doctorate in medicine in recognition of her eminent service to health, being an inspirational role model for aspiring women in business and making a difference in society. In 2015 she was conferred an Honorary Doctor of Letters by the University of Wollongong, for her contribution to mental health and ageing. In 2014 Sydney’s Macquarie University conferred an Honorary Doctor of Letters on Ita in recognition of her contribution to the arts. She was the Inaugural NSW Excellence in Women’s Leadership award winner. (2014).

She received an AO in 1988 for her services to the community especially in the field of public health education when she spearheaded Australia’s HIV/AIDS Education Program, an OBE for her services to journalism, and a Centenary Medal for business leadership.