The Australia-United Kingdom Chamber of Commerce is the independent UK-based membership organisation connecting the business community and professionals with interests in both Australia and the United Kingdom.

With a diverse membership and network as well as trusted partnerships across the Australian and British Governments, we are the platform for industry to access and influence Australian-UK business intelligence, audiences and trade opportunities.

By delivering a range of events, membership services and strategic initiatives we connect our members and partners to decision-makers, smart ideas and fresh opportunities.

Australia and the United Kingdom

Australia is the 13th largest economy in the world with more than 28 years of uninterrupted economic growth. Australia shares a strong economic and trade relationship with the United Kingdom, which is the world's 5th largest economy in the world. As well as being Australia's 12th largest two-way trading partner, the UK is Australia's 3rd largest services trading partner. The UK and Australia also share a significant bilateral investment relationship, with FDI between the two countries valued at AUD$815 billion or £450 billion. Today there are more than 1,500 Australian companies that are active in the UK across a range of sectors including financial and professional services, technology, natural resources and travel services.

The Hon George Brandis QC was appointed Australian High Commissioner to the United Kingdom in May 2018. Mr Brandis has had a distinguished political career in Australia as a member of the Federal Parliament. His appointments have included Attorney-General, Vice-President of the Executive Council, Leader of the Government in the Senate, Federal Minister for the Arts, and Deputy Leader of the Government in the Senate.


Dick Porter, as well as being the Chairman of the Chamber and a co-founder of STA Travel, is also the Director, Trustee, and Member of several organisations including the Australia Day Foundation, Global Implementation Group at University College London and the University of Western Australia UK Friends.

Catherine joined the Chamber as CEO in 2016, bringing with her almost a decade of experience in international economic development and industry-government relations. Catherine has previously held leadership roles working with multinational companies to support their expansion into new markets through facilitating strong government, research and commercial partnerships in both Australia and Europe.

Catherine previously held the role of Investment Director for the Victorian Government of Australia's United Kingdom office where she led its regional trade and investment strategy and team across the UK, Europe and Israel. Catherine holds a Bachelor of Laws and Bachelor of Arts from the University of Melbourne.

Philip Aiken is Chairman of Balfour Beatty and Aveva and a Non-Executive Director of Newcrest Mining. He was also the Chairman of the Chamber from 2006 to 2013. From 1997-2006 Philip was President Energy Group and President Petroleum of BHP Billiton and Managing Director Gases Europe and South Pacific for BOC.

Sir Lynton Crosby is a campaign manager and strategist, and Co-Founder of the C|T group. In 1998 and 2001, Lynton successfully managed the campaign for Australian Prime Minister John Howard and in 2008 and 2012 he was Campaign Director for Boris Johnson, Lord Mayor. In the 2015 UK General Election, Lynton was the Campaign Director for the Conservative Party in its historic victory.

Chris Hickey is the CEO of the UK, Middle East and African businesses for Robert Walters plc. Chris is responsible for the Group’s UKMEA businesses including, but not limited to financial services, commerce accountancy, IT, HR divisions. Previously, Chris worked as a solicitor in Australia, the UK and Switzerland with Lehman Brothers.

Claire Small is Clinical Director of Pure Sports Medicine, co-founding the organisation with others in 2003. Pure Sports Medicine was the first multi-disciplinary clinic of its kind in the UK and is still the leading organisation providing a comprehensive service to patients with musculoskeletal problems. Claire continues to treat patients and is active in teaching, lecturing and research to ensure that the drive towards clinical excellence is a fundamental part of the ethos at Pure.

Jeffrey is the founder of Allegra Strategies, a management consultancy focusing on the food and leisure sector. Jeffrey is also the founder of UK Coffee Week and the London and New York Coffee Festivals, Chairman of the Allegra foundation and author/editor of 20 books.

Anna is Qantas’ Regional General Manager for the UK, Europe, Middle East, India and Africa. Prior to coming to London, Anna was Qantas’ Head of Legal and Assistant Company Secretary, heading teams responsible for providing strategic competition and regulatory advice, oversight and compliance, engaging with key regulators and managing litigation and dispute resolution and corporate governance across the Qantas Group.  Prior to joining Qantas, Anna worked at in private legal practice at Allens and the Australian Government Solicitor. 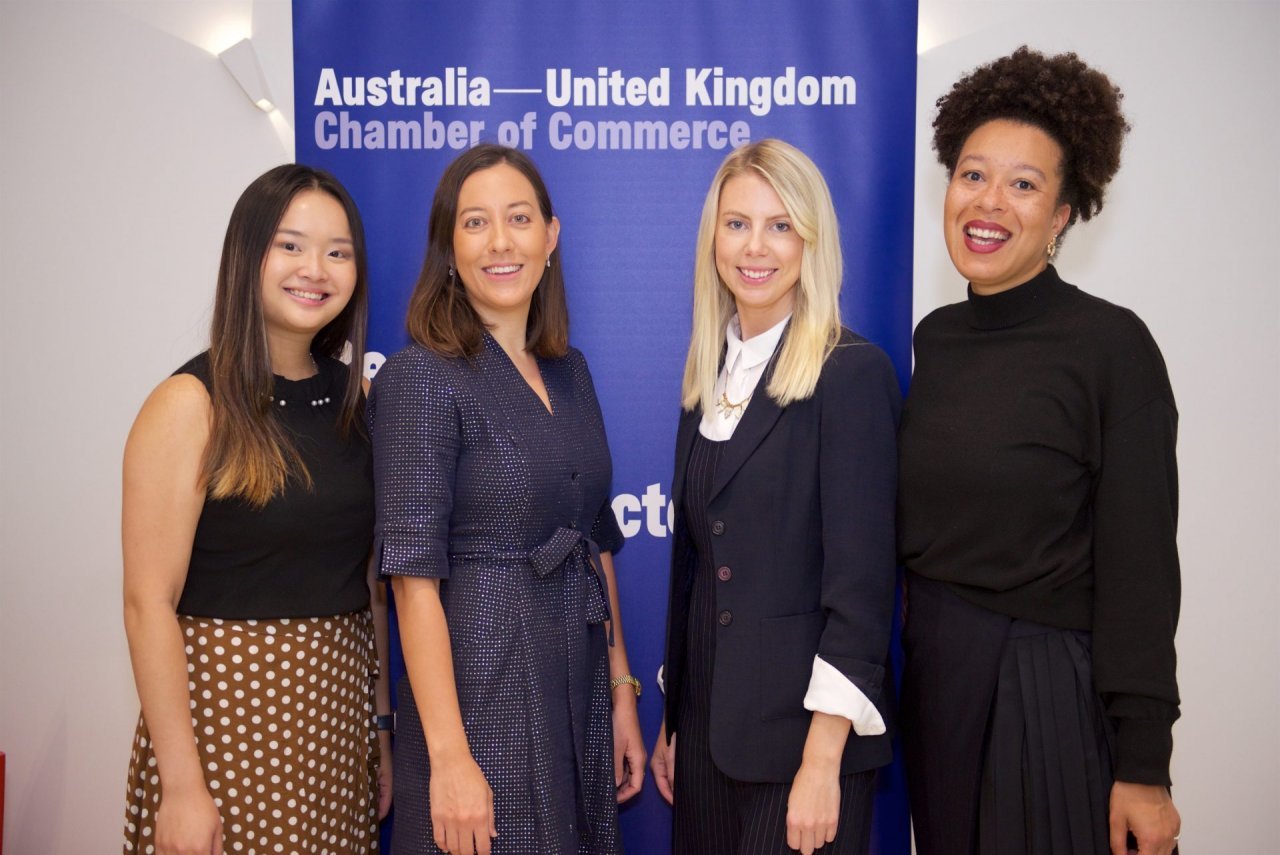 The team at the Australia-United Kingdom Chamber of Commerce. From left to right; Yan Wong, Catherine Woo, Hannah Bretherton and Kylie Shore-Oliver

Catherine joined the Chamber as CEO in 2016, bringing with her almost a decade of experience in international economic development and industry-government relations. Catherine has previously held leadership roles working with multinational companies to support their expansion into new markets through facilitating strong government, research and commercial partnerships in both Australia and Europe.

Catherine previously held the role of Investment Director for the Victorian Government of Australia's United Kingdom office where she led its regional trade and investment strategy and team across the UK, Europe and Israel. Catherine holds a Bachelor of Laws and Bachelor of Arts from the University of Melbourne.

As the Australia-United Kingdom Chamber of Commerce Chief of Staff, Kylie Shore-Oliver is responsible for the smooth day-to- day running of the Chamber. Kylie is responsible for the
accounts and office management as well as numerous other tasks. Kylie has a background in international relations and has previous experience in business development and luxury retail.

Despite her very Australian name, Kylie is originally from Nottingham in the East Midlands and recently spent two years in Melbourne where she developed a love of the Australian brunch culture and the great outdoors.

As the Events Coordinator of the Chamber, Yan combines her acumen in event operations and logistics coordination to plan and execute the Chamber’s event program ranging from roundtables to briefing seminars, networking receptions and formal breakfasts. She holds a Bachelor of Events Management and Bachelor of International Business and has a proven track record in delivering high quality events across Australia. Yan looks forward to gaining international event exposure in the United Kingdom through her role at the Chamber.

Yan is from Brisbane, Australia and has brought her love of food with her making her very keen to discover the best brunch cafes London has to offer.

As the Member Relations & Marketing Executive of the Chamber, Hannah is responsible for looking after our members to make sure they meet their strategic goals and are engaged with our network.

Hannah began her career in the office of former Australian Foreign Minister Bob Carr, has worked as a policy researcher for the Australia-China Relations Institute and China Matters and was previously a policy advisor in the NSW Government Department of Premier & Cabinet. Hannah is passionate about gender equality and is the Founder of a workplace diversity & inclusion consultancy called The 3:30 Project.

Hannah is from Coogee in Sydney and grew up on the Central Coast of NSW. She spent a year living in Munich and is keen to continue exploring Europe as well as the rest of the UK. Hannah holds a Bachelor of International Studies (First Class Honours) from the University of New South Wales and is a Fellow at the Lau China Institute, King’s College London.